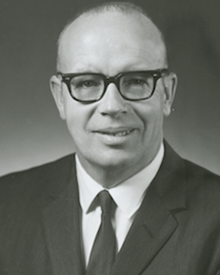 Maury (Deceased) earned B.S. and M.S. degrees in Agricultural Journalism at UW-Madison and joined the Department of Agricultural Journalism (now LSC) in 1947 as director of the university’s farm radio program. Except for a two-year stint as farm radio director at Ohio State and time at Cornell to earn his Ph.D., he remained behind the microphone until 1968 when he was named the director of the Farm and Industry Short Course —a position he held until his retirement. As a faculty member in the Department of Agricultural Journalism his teaching and research focused on agricultural communications and broadcasting. In addition to teaching UW students, he instructed county agents from Wisconsin and other states in the use of radio and television.