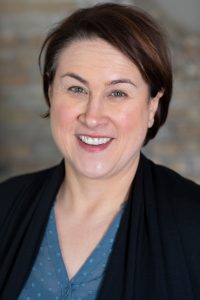 Ahna is a Professor in the Department of Genetics, and an affiliate faculty member in the UW-Madison Arts Institute and in Life Sciences Communication, where she mentors LSC undergrads who are interested in using science and art in public outreach efforts for independent study.

Ahna is a geneticist, artist and a winner of the prestigious Presidential Early Career Awards for Scientists and Engineers (PECASE). Her lab seeks to understand the molecular mechanisms that underlie cell division during embryonic development using the nematode, C. elegans as a model system. Failures in cell division often lead to birth defects, cancer, and age-related neurodegenerative diseases. Understanding how cells divide is highly dependent on in vivo microscopy and large amounts of visual data, which dovetails perfectly with one of her other passions, art. The combination of scientist and artist inspires her to think differently and maintain an open mind. Some of her work can be seen in the main entrance of the Genetics/Biotechnology Center building on the UW-Madison campus. She has also curated and contributed to a traveling exhibition of scientific art called “TINY: Art from microscopes” from the UW-Madison campus and she has organized the bi-annual Worm Art Show for the International C. elegans Meeting since she was a graduate student.

Ahna, who is part Eastern Band Cherokee, is also passionate about increasing the numbers of underrepresented students in STE(A)M fields. On the UW-Madison campus and in her department, she has established several very successful recruitment and retention programs, and served two consecutive terms as the Chair of Equity and Diversity in the College of Agriculture and Life Sciences (CALS). In 2016, she was awarded the very first of two, Chancellor’s Inclusive Excellence Award for her outreach and inclusive teaching efforts. She has served as a board member for SACNAS (Society for the Advancement of Chicanos and Native Americans in Science) and was recently elected to the ASCB (American Association for Cell Biologists) Minority Affairs Committee where she has broadened her impact on underrepresented students in science nationally.

In 2008, she was awarded an honorary doctorate of science from the College of St. Benedicts and was named a Remarkable Women in Science from the AAAS. In 2015, she was honored as a Kavli Fellow from the National Academy of Sciences. Her science and art have been featured by Apple, The Scientist, USA Today, Smithsonian, PBS.org, NPR and Science magazine.

You can find a list of her publications on Google Scholar.