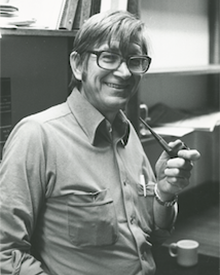 Richard “Dick” Powers (Deceased) was a professor in the Department of Agricultural Journalism (now LSC) starting in 1951 when he joined the faculty as a science writer. He served as chairman for the department from 1964 to 1969. Powers was awarded the Excellence in Teaching Award of the College of Agriculture and Life Sciences in 1982. He is the author of the “The First 75 Years”, a brief history of the Agricultural Journalism department.