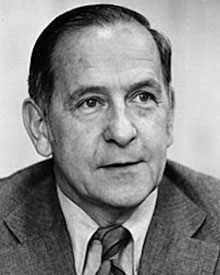 Bryant Kearl (Deceased) played a key role in the development of the Department of Agricultural Journalism (now LSC).  He joined the faculty in 1942 and served as department chair from 1951 to 1963 and notably expanded the research program during his tenure. Kearl helped continue the department’s strong commitment to effective extension information. Kearl also helped stress the importance of building strong communications components into overseas contracts for the college and is credited for helping to establish many of the university’s international programs.In 1963, Kearl served as Associate Dean for the Graduate School.  Then in 1967, Kearl took on the role of Academic Vice-Chancellor for UW-Madison where he served under William Sewell, Edwin Young, and Irving Shain. He then served as acting chancellor from July 1 to September 12, 1968. In 1893, Kearl became the first Dean of the Division of Outreach where he was charged with integrating the University and the Madison-based UW-Extension programs.